Firefox Has Too Many Developers

In its last several releases, everyone's favorite Open Source browser has become an unstable mess of add-ons, plugins, and other hacks that chew up memory like a fat kid with a chocolate-dipped corn dog. In fact, just last week, SecurityFocus released news of a devastating exploit in Firefox 3.5.5 that they blame squarely on its unstable architecture.

From its infancy Firefox has been the product of collaborative effort, unifying code from hackers worldwide. But thanks to the Hayes Law, we see that there is a "sweet spot" to such a development style, and that Firefox has long since left it behind. In the chart below, we can see that the number of Firefox developers has increased exponentially since 2002, and that number will more than double in 2010.

But it's time to be honest: either Firefox, as a modern web browser, will have killer performance on 64-bit, multicore Intel chips or it's not worth downloading and installing. And since, as we have seen in the recent past, that Firefox is actually getting slower with each release, Firefox is certainly a waste of time for anyone who takes their web browsing seriously. 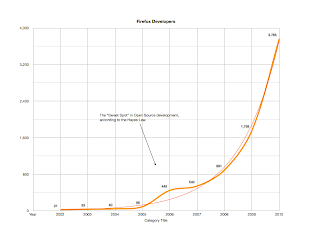 The Hayes Law states that, given a specific type of software project, there is a certain complexity associated with it, and with that complexity an optimal number of developers. It's actually a little more complicated than that, taking into account development model, coding platform, programming language, and code repository platform, but in the end it's easy to plug in the numbers and see where a project's headed.

Against the Hayes Law, Firefox appears to have jumped the shark sometime after the Firefox 2.0 in 2006. The next major release, Firefox 3.0 in 2008, introduced many issues users today complain about: bloat, sloth, instability, and insatiable hunger for memory. Firefox user complaints increased in tandem, all syncing up with the jump in developers. Ergo Firefox's problem: too many cocks in the kitchen.

To further underline this growing problem, Firefox completely falls down in Acid3: Firefox 3.5 scores 93/100, and Firefox 3.6 scores only 87/100. Needless to say, Firefox 4.0 mockups score 0/100. Sadly, this is a continuation of a trend: Firefox took the longest of all browsers to beat Acid2. And don't even think about Acid4. Firefox is collapsing under its own weight.

The core of this problem looms: the number of developers, as seen in the chart above, will only continue to skyrocket for Firefox 3.6 and beyond. By the time Firefox 4.0 is released, sometime in December 2010, the number of developers will be nearly 4,000, almost a full magnitude greater than the optimal 445 or so in 2006. Clearly, Firefox is about to capsize.

So what is to be done? Users can petition the Mozilla Corporation and the Mozilla Foundation to rethink their development model, focus on optimization instead of new features, and perhaps backpedaling on some of the less sensible projects like Mozilla Mobile and the non-standard XUL interface. Concerned individuals should log into Mozilla's Bugzilla and let loose with their bug and crash reports like never before.

Unless Brendan Eich and Mitchell Baker take their heads out of their asses, however, the best course of action is to escape Firefox like rats from a sinking ship. There are other options out there: Apple's small, fast, and efficient Safari, coded by several dozen professional programmers, is currently the best browser for Mac and Windows. The time-honored Internet Explorer continues to embrace and extend Web standards. Other browsers like Chrome, Opera, and Lynx are out there too but aren't for everyone.

In the end, Mozilla Firefox as it stands is a sick browser that is in need of emergency surgery not ready to take on the challenges of Web 2.0 and things like CSS 3, HTML5, and JavaScript 1.9. Unless something happens soon, Firefox will take the entire World Wide Web—and everyone who depends on it—back to the Stone Age of the Internet.