Highly reliable sources are reporting that Mr. Jobs will once again be going under the knife in mid- or late-'06 in order to upgrade the CPU in his brain from a PowerPC 970 to one of the new ultra low power Pentium M-derived chips upcoming from Intel. 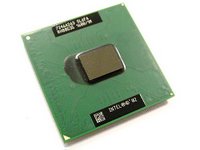 Years ago, in Spring '03, Steve Jobs participated in a top-secret program with IBM that installed a PowerPC G5 in his cerebral cortex, enhancing his Reality Distortion Field and giving him bionic mathematical abilities. The program, modeled on a similar idea from Motorola with its G4 that Jobs had declined, was successful.

Now, in the present, Jobs wishes to go with the times and upgrade his aging G5 with the latest and greatest from Intel, with sources reporting 64-bit support, SSE3, and dual cores all likely. Sources wouldn't say which chip it was exactly, however, citing Intel's long list of CPU code-names as too confusing to sort feature sets from.

One curious source asked us a perplexing question: Will Jobs be able to stay awake longer and have more energy since the new Pentium chips are significantly more power-efficient than the G5? Performance-per-watt is outstanding in the new Intel designs, but it really comes down to what chip he the surgeons install.