The PowerPC G4 Is a Lie

At the heart of the current high-end Macs, routers, and switches is the PowerPC G4, which is what Apple and Motorola claim to be their fourth generation CPU that is the result of the three-way Apple/IBM/Motorola alliance, which has been designing and fabbing various PowerPC chips since 1991.

I contend that “G4” is a blatant misnomer by Apple and Motorola to spur sales and compete with Intel's Pentium 4 product and nomenclature. Below I'll give some historical background, technical information, and plain facts that support my claim that the PowerPC G4 is really a second-generation processor, and the broader notion that the PowerPC family has not evolved significantly since 1995, something Apple and Motorola propaganda has repeatedly accused the competition of in recent years. But first, the background.

By 1991, Apple, IBM, and Motorola had begun working on a single-chip implementation of IBM's RSA chipset. This was IBM R&D's attempt to hack the POWER architecture into one chip instead of several. Imagine, instead of having a 64mm PowerPC chip having to use a 64cm PowerPC board. That's unacceptable to the desktop market.

Motorola brought bussing technology to the table, which had previously been intended for their Ripfire 88k RISC series (displaced by the PowerPC) and Apple brought years of motherboard knowledge and operating systems (A/UX, Mac OS 7, and Copland). Between these three giants, the PowerPC 601 was realized. It ranged from 50-125 MHz but was soon replaced by a quartet of newer, second-generation (G2) parts: the 602, 603, 604, and 620.

The 602 was an embedded chip, being used for satellite descramblers, stadium scoreboards, and the Nintendo GameCube. It lacked an FPU. The 604 was a workstation-class monster. Performance was above the Pentium Pro's clock-per-clock. The 620 was a 64-bit godhead beast that trounced all known microprocessors of the day but was mysteriously terminated after it had been included in only a handful of beta motherboards by Groupe Bull. The 603 was designed to draw little power and be cheap to manufacture, but AIM had hobbled it a bit too much: beta testing sent it back to the lab to add L1 and L2 caches. Performance afterwards was dismal, but acceptable for cheap consumer offerings at the time.

It was this enhanced PowerPC 603 that would be the basis of its own savior. Apple and Motorola only admitted that the 603 was sub-par along its whole production run when they had a replacement ready. By taking the L2 cache architecture of the 620 and adding it to the 603, they had created the PowerPC 750L. And to Apple and Motorola, this small change justified dubbing it a whole new generation of processor. Say hello to the G3.

Fast forward a few years. By 2001, Motorola was shipping the 800 MHz PowerPC 7450, a G4 series part. Of course the “G4” means fourth generation, which is totally misleading. Look at it this way: the entire 74xx/G4 family is based on the G3 family, its prime advancements over the G3 being an FPU ripped from a PowerPC 604, and AltiVec, a questionable technology meant to operate on multiple pieces of data at once (MMX, anyone?). To get a better look at the crawl from 603e to the latest G4, take a look at the following chart. 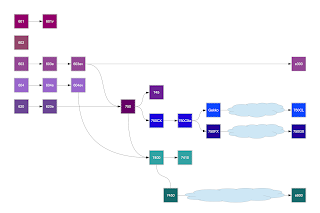 The 603 and its bigger brother, the 604, were the workstation-class CPUs used in Mac. Apple used the doggish 603 in their low-end consumer boxes and portables. Why they decided to use the 603 core to continue the PowerPC line is not clear; obviously, the 603's unimpressive performance was well-known by all at all levels of Motorola and Apple. How many leaps ahead could PowerPC be today had Motorola used the 604e as the basis of the G3? Instead we have a chip that, five years later, is worth little more than its earlier, simpler version at the same clock.

To further simplify my point, let's just bring some performance scores from various cores to the 1,000 MHz (1 GHz) level. I did this for chips that have not reached 1 GHz by scaling results for other clock rates. I've also included marks for the latest G3 from both IBM and Motorola as well as IBM's new PowerPC 970. 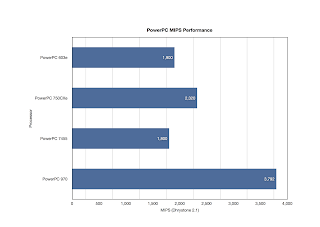 In the above chart it's easy to see that PowerPC 7455, Motorola's latest iteration of the G4, can't even compete with the PowerPC 603e. Ten years of progress has resulted in a part only 95% as fast as it ultimate predecessor. On the other hand, IBM's new 64-bit processor, the PowerPC 970, is actually a totally new microarchitecture. It does not descend from the 603, G3, or G4 cores and instead claims lineage to the Power4, of which it is a desktop-optimized version. To this end, performance is spectacular. It runs from 1.4 GHz to 2 GHz at present and should scale to 3 GHz before it tops out. It handily beats any 603-derived offering cycle-per-cycle.

As you can see the G4 is really just an evolution of the 603. The more features Motorola adds to the creaky, second-generation 603 core, the slower the chip goes. Don't believe me? Visit Motorola's site and read the numbers. A 500 MHz PowerPC 7400 is just as fast as an 800 MHz PowerPC 7450. And why are IBM and Motorola still continuing PowerPC 750 development? Motorola can no longer expect to push this aging family to 1 GHz. It's clear that for PowerPC to survive, something drastic must be done.

One option is to resurrect the PowerPC 604e. Since it topped out at 400 MHz in 1997, Motorola has introduced Silicon-on-Insulator and copper wiring to their fabrication processes which could be applied to the powerhouse. It's likely that such an updated core could reach gigahertz speed. Seeing that the PowerPC G3 began at 200 MHz and now scales beyond 1 GHz, the 604e could do much better. It started at 100 MHz and made it all the way to 400 MHz, after all. Another more expensive option is to resurrect the PowerPC 620 which was already 64-bits in 1995 when it quietly sank beneath the waves. Given a modern technology makeover, it could compete directly with the PowerPC 970.

Only one thing remains clear through all of these muddied waters: A solution to using dodgy G2 technology to drive Macs and networks must be achieved, and to that end Motorola must either swiftly change its pace of innovation and quality of fabrication, or be dropped entirely. Pawning off ten year old technology is not only dishonest but is killing the platform.